BIRTH OF THE FUTURE BEHIND THE CRAFTED ORNAMENT 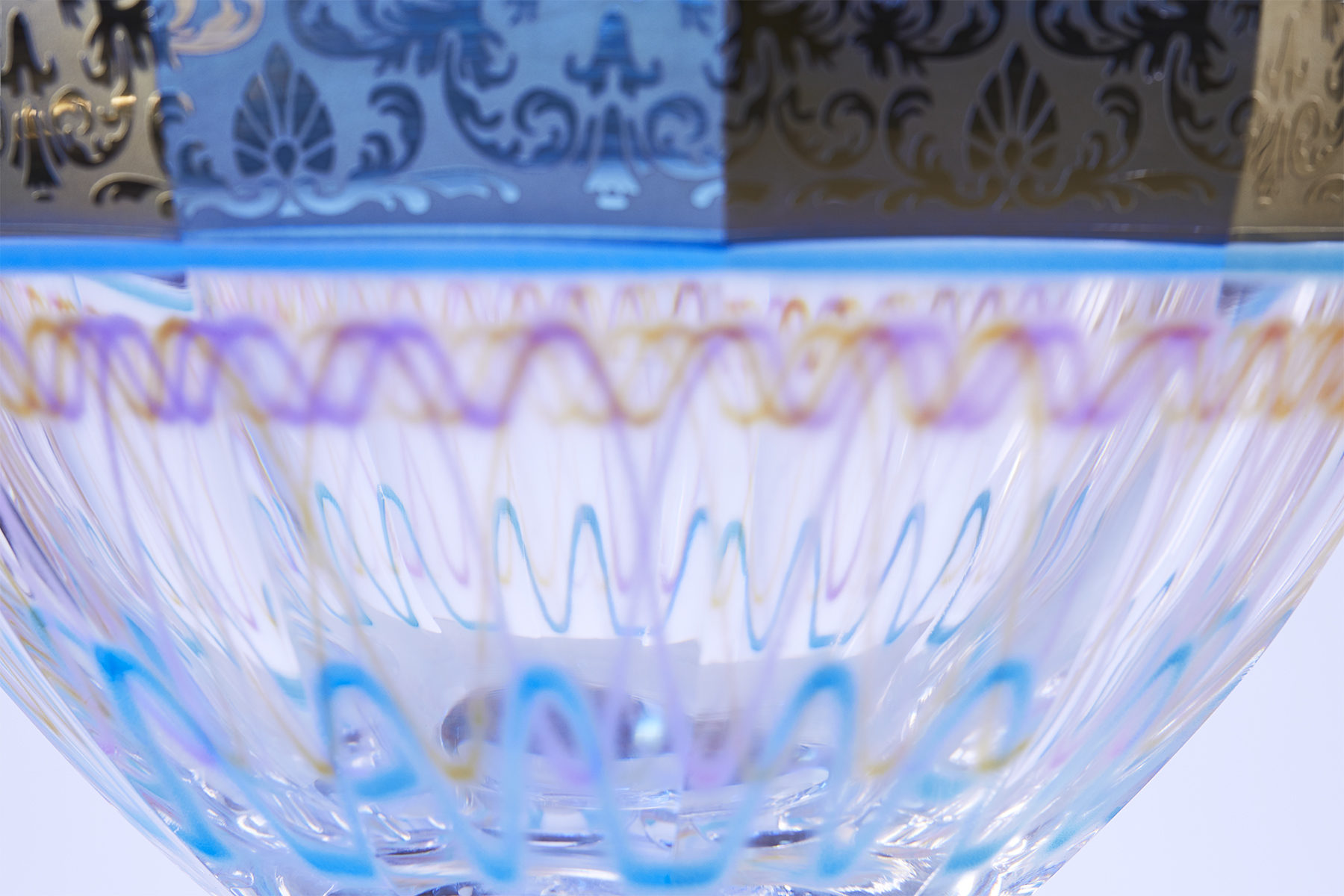 Vases from blown glass, hand cut and painted, with gold luster and oroplastics, produced with the traditional craft procedures of the company Moser and arising out of the aesthetics of the 18th and 19th centuries, František Jungvirt intentionally undertakes other production processes that redesign the vases and impart to them contrasting levels of time and concept. Exquisite in their craftsmanship, the finished objects of Moser vases display the spraying of paint through air-brush digital technology. This functions by means of programmed software; the paint is sprayed onto the surface of the vase in planned intervals with the help of a spray gun attached to a robotic arm. Irregular leakage of paint from the spray gun still cannot be completely predicted and against a historicist manual décor such fast robotic-arm activity can seem iconoclast. Jungvirt also similarly intended to use cut décor, the elaborate figurative variant of which he wanted to expose to a programmed robotic arm with an engraving diprofil which would repaint the craft décor and strike radical cuts and facets into it to the edge of perforation or cracking.

The manual and slow crafting of a vase that represents the past, old time, combines here with robotic décor, built up before our eyes in the up-to-date, on-line, observable, instantaneous present. The variety of time levels – heterochrony – is here further complemented with radical variation of work approach: while the first stages of the production process contain the glassblower’s breath, manual cutting and painted ornamentation, they are set against the later, post-production level which is controlled by a robot with software and programmed pre-selection. While the first, craftsman stage can be influenced down to the last detail and moment through human will and in the form of gradually added, intuitively felt manual interventions, the other is conceptually, already apriori predetermined and dependent on an algorithm of a calculating program. The elemental difference is not only in the contrasting technologies, the work process of the hand versus the programmed robotic arm, but also in the linguistic description of such production between verbal active and passive: while a glassmaker, glasscutter or decorator performs handwork on a vase actively, the automated process was done passively by means of a robotic arm. It is of course possible that the development of artificial intelligence and so-called disruptive technology – bringing break-through innovation in the areas of managing, decision-making and finally even creation – will destabilize the status quo10 that we have gotten used to in the design field. Future technologies will even manage not only routine and predictable tasks, but their “super-intelligence” relativizes the usual antagonism between the authorial, manual, creative activity and the personal, robotized, programmed work. It is possible to program coincidence or mistake. Will it obviously be possible to think up an algorithm that can – with sensitivity – react to classic aesthetic categories of beauty in human art history? Or will the taste and delicacy of feeling of a post-human society of cyborgs be completely different? Will it be at all? Jungvirt’s project does not even directly open these questions.

We use cookies on our website to give you the most relevant experience by remembering your preferences and repeat visits. By clicking “Accept All”, you consent to the use of ALL the cookies. Read More Accept
Manage consent

This website uses cookies to improve your experience while you navigate through the website. Out of these, the cookies that are categorized as necessary are stored on your browser as they are essential for the working of basic functionalities of the website. We also use third-party cookies that help us analyze and understand how you use this website. These cookies will be stored in your browser only with your consent. You also have the option to opt-out of these cookies. But opting out of some of these cookies may affect your browsing experience.
Necessary Always Enabled
Necessary cookies are absolutely essential for the website to function properly. This category only includes cookies that ensures basic functionalities and security features of the website. These cookies do not store any personal information.
Non-necessary
Any cookies that may not be particularly necessary for the website to function and is used specifically to collect user personal data via analytics, ads, other embedded contents are termed as non-necessary cookies. It is mandatory to procure user consent prior to running these cookies on your website.
SAVE & ACCEPT